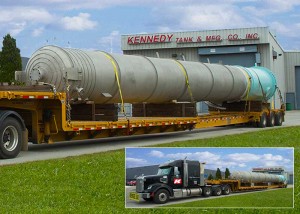 Distillation columns are widely used in the chemical process industries where large quantities of liquids have to be distilled. Distillation columns separate liquid and vapor mixtures into component fractions of targeted purity, by the application and removal of heat. Over the years, Kennedy Tank has been called upon to provide a number of distillation columns to its customers in a variety of industries, including chemical and petroleum.